Hello everyone.  I am very late in posting today.  It has been quite a stressful day.
I will get back to a regular post on Thursday.

Early this morning G looked out the back window and said there were dogs in the yard.  Our back yard is totally fenced and I knew I had the gate closed.  About that time he said they are after the cats!!

I ran out and there were 2 pit bulls in the yard and I yelled and they climbed over the fence to the alley.   Momma and Fluffy were 20' up a tree.
I was having a small fit.  Got out the tallest ladder we have - not even close enough to get them.  I leaned it against the tree to give them something to come down as they were on the lowest braches.
Just as Momma started down  - back came the d**m dogs in the yard.  Out I went and ran them off again. 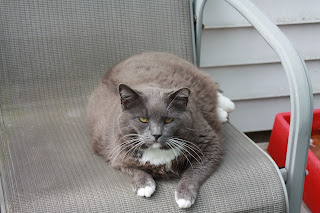 I called animal control and was told they didn't have time!  WHAT???  They asked if they were vicious and I said they were trying to attack pets and they were climbing fences.  Yes, she said, they are vicious.  No sh**!!!  I was furious if you can't tell!!!!!!
I went back out and the dogs were threatening me at the fence, growling and barking and acting forceful.

I got my neighbor who has a bigger ladder to come and help me - kitties down and terrified and hiding.  Dogs still roaming neighborhood.
I got in the car and drove around to see where they might be.  Ran into others doing the same.  They were menacing the entire neighborhood.
One lady and I saved a young boy about 10, from getting mauled.  The dogs came out of no where and went after him - of course he ran screaming.  We started honking and they ran away, and I got the kid to tell me where he lived - a couple doors down - I followed him and got him home.  He was so terrified.

We were driving around tell anyone who was outside to be careful and keep pets in.
Finally 2 people DID get bit and THEN the police got involved, which got animal controls' butts out here.

Police were patrolling and I talked to one officer and explained everything.  I told them where they last were seen.  I have no idea what happened - but they were on it and hunting them down.

I am a HUGE animal lover, but had they come back in my yard, I would have shot them.  I would probably be in trouble as it is illegal to shoot a gun in the city limits.  I would hope that feeling endangered or threatened would make a difference.

I think they may have belonged to the people behind in the alley.  They have had 6 or 7 pit bulls living IN their 2 bedroom house with them and 4 kids for ages.  I noticed today - they are gone.  No curtains at windows and the house is empty.  I think they left them.  I told the police that as well.  He said other neighbors said the same thing.

I sure hope that they got them.  I hope no one else or no one's pets got hurt or worse.  That was so stinking scary.
Momma finally came out from under the deck and back in the greenhouse later today, Fluff is still hiding.  Poor babies.

All this was being done in the rain and chilly temps.  I was wet to the bone and ache from head to toe and feel so tired.  Thank God we are all ok.  I will be 'packing' for a while when I go out to the backyard - JUST IN CASE!

So apologies all for no regular post.  Back later this week.
Say a little prayer that they got the dogs!!!  Please and thanks.

Posted by Cheryl Kimbley at 6:25 PM