Let your mind wonder back many years and think about some of the TV shows and movies we had available to watch.  The Star Trek TV series was so out of this world as was Star Wars.  Now we have space craft and people are spending months in space, we have landed on foreign planets, we have genetic manipulation, we have technology that can seem scary at times.  Fiction in many cases became reality.
Over the New Year's weekend I watched part of  The Twilight Zone  marathon.  First let me say, that ANYONE who went on to be famous in the acting field, was on that show!!  It was amazing to see all kinds of young, not yet famous, actors.

Why do I mention this?  Well, one of the shows I saw - reminded of what "could" happen today in the event of a major disaster.
Let me set the stage:  Cold war years (started mid/late 40's), mid America, newly built modern middle and upper middle class neighborhoods, young families living the dream.  People moving upward on onward after the war/depression were over.  Prosperity seemed to rein.  Life was tranquil.

In this show - only one family in the neighborhood had the foresight to build a bomb shelter under their new home.  They had it equipped with food, water, medical and living comforts for their little family for 2-3 months.  Everyone else thought they were crazy.
One day a radio announcement happens - unidentified flying objects have been seen in the skies heading toward metropolis.  Government and public were in a panic.  This family was getting their last minute items into the shelter - then the neighbors start showing up!  They wanted in too.  It is only the right thing to do they said.
Now mind you - there was enough oxygen and air supply and power  (not to mention food and supplies) for this family of 3.  They HAD PREPARED.
The show went on to show the anger and meanness that happened with people trying to get in this shelter.  The were destroying this families home, they were working together in a mob to rip open the shelter, they didn't care that by prying it open they were guaranteeing doom to all.  All they were concerned about was themselves.  They were ready to harm their neighbors - to survive. 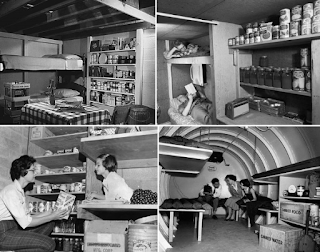 After causing much destruction, name calling, and truly making forever enemies - an announcement came that it was all a false alarm - the coast was clear.  Men were trying to apologize for horrid behavior, Moms were saying  "you would have done the same thing", people were expecting relationships to go back to normal.  The prepared family saw just how horrible people (their neighbors) could be. Nothing would ever be the same.

My point - this was a fictional show - but I see this as reality in just a heartbeat.  Those who live in areas that has cold weather know what havoc the four letter word SNOW can cause.  Shelves at stores empty in a couple hours.  People act like they will be snowed in for weeks (although many just buy junk).  Milk, eggs, and bread - are gone in minutes.  People panic!
Hurricanes and  any other natural disaster - items are gone and if found - price gouging takes hold.  Trucks can't make deliveries - stores only carry enough provisions for a week or less.  Power outages - stores, banks, gas stations, etc. are all in the digital age now and can not open and operate - looting happens.

We discuss our prepping, storage and pantries here - but 99.9% of us have never met or seen one another - nor do we have any idea where exactly the others live.  This is our SAFE spot.

BE CAREFUL who in your neighborhood and local area knows what you have.  You too could become the target of those who have NOT prepared, as in the TV show.
Yes, many of my family know how I prepare - and most of them have followed suit and do so as well.  My neighbors - I truly doubt any have prepared  (but perhaps they have and don't advertise).
People who feel desperate will do anything.  We see this on the news every day.

I guess this post is just a cautionary tale.  Be careful of who knows what you do.  Be prepared by all means (odds are some occasion will happen at some point) - but be quiet and somewhat secretive about your preps.
Keep working on learning about growing, preserving and preparing for any future problem.  It could be a natural disaster, a medical emergency, job loss, economic collapse, world strife, grid collapse, ANYTHING!
Keep your local network small.  Don't brag to neighbors (people talk)…...  BUT BE PREPARED.


"You are moving into a land of both shadow and substance, of things and ideas.  You've just crossed over into ………….The Twilight Zone".