Howdy all.  Our Moms and G'mas all knew how to stretch the food budget.  NOTHING went to waste.  If it got to the point that there was something left that wasn't edible it went into the compost pile or to the chickens - which in turn became more food down the road.  My Mom could come up with all kinds of tasty items from leftovers (bits and bobs) and knew how to make goodies out of things most would throw away.
Going to share a few stretching ideas and cheap eats that we had back in the day - and some I still have!  Not everything from back in the day should be forgotten.  I love doing something different now and then.  You never know when money and food will be tight and you may have to get creative.   SO here are a few 'crazy' ideas to try.
Leftover mashed potatoes - they were never wasted!   May be for another meal or they could be used in a cream of soup - to help thicken or flavor.
My favorite was & is:
Potato Pancakes
About 2 C mashed
1 egg
1/2 C or so of flour - just enough to stiffen potatoes
1/2 - 1 tsp. baking powder
Anything else you want to add!!!!
Mix together and place in a greased skillet and fry - until both sides are golden brown.
I have added chopped onion, bacon bits, cheese, peppers......... whatever you want
So tasty 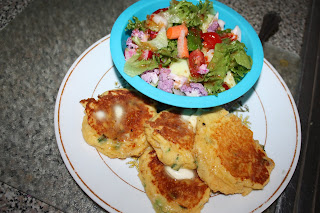 Potato cakes with a dab of butter and a salad.  Quite a tasty and filling meal.  Nothing wasted!!!!!
Pie Dough
Mom never let pie dough go to waste.  She may make 'hand pies' if there was enough left.  Small circles with a bit of jelly or fruit in center and folded and baked.  Most often she rolled it out in strips and added cinnamon & sugar on top and baked till crisp!  What a yummy treat that was.
Apple/Peach Peels & Cores
Never wasted.  Apple peels & cores and peach peels were turned into jelly.  Yes indeed.  Now this recipe takes quite a bit of sugar (which was so much cheaper back in the day), but it sure was tasty.  Actually sugar today isn't that expensive - it is just something anyone that cans much has on hand all summer. 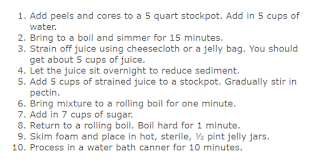 Usually need the peels of about 15 pcs. of fruit or more. (Optimum flavor).  You can add a drop or 2 of red food color to apple to give it a pretty pink color.  One drop red, one drop yellow to give peach a pretty peach color.  No wasting!  Either the chickens or compost get leftovers.
Mom also took apple peels and laid them out on a pan and sprinkled them with cinnamon and a dab of sugar and stuck in the oven when baking.  Another fun and easy treat that I just loved.  Kind of like fruit leathers of today! (she did this if NOT making jelly)
Corn Cob Jelly
Yep - she even did that.  I have done this myself and it is very tasty.  Kind of honey tasting. 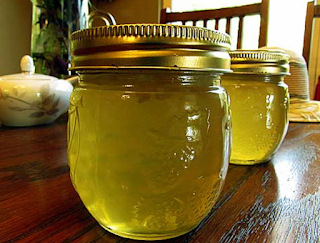 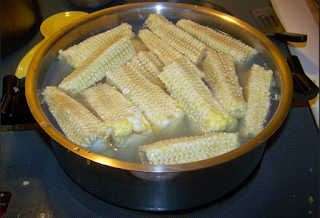 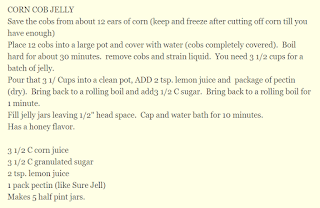 Johnny Cakes - Corn Cakes - Hoe Cakes
Whatever you want to call them.  Many southern gals made these - but we had them often.  Nice for breakfast if running low on breakfast food - a nice addition to any meal (instead of bread).
Most recipes were as simple as cornmeal, water and salt - and a hot skillet!
I like them with a bit more added - but you can do them any way you like.
1 C yellow cornmeal
1/2 - 1 tsp. salt
1 tsp. baking powder  (for volume)*
1 - 1 1/2 tsp sugar (or honey) - I like a little sweetness*
1/2 C HOT water - or you can add some kind of milk (1/4 C milk and 1/4 C HOT water)
1 egg -  (adds volume as well)*
Mix altogether and drop into a hot skillet with bacon grease or butter melted.  Brown on each side like you would a pancake!
**Gluten free
* these items optional 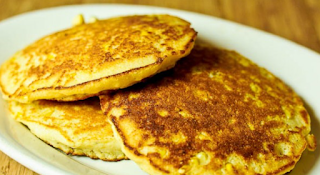 Corn cakes - great side or used instead of cornbread (no oven required) or used as breakfast.  Topped with a bit of butter - Yummo!!
Peanut Butter Treat
We often had peanut better and some syrup or honey mixed together and we would eat that on bread or crackers - whatever was available.  That was such a tasty treat!  My goodness that was a favorite treat.  I remember most often it was served on saltine cracker.  YUM
Hamburger Soup
We had this often.  Hamburger was super cheap to buy and Mom always made a pot of soup with all the veggie leftovers we had or just with garden pickin's.  Nothing like it.  I still make it today and it is one of my favorite soups.  Never fixed the same way twice.
Nothing went to waste!!!!!
Chili
Another favorite from back in the day.  My Mom often made it with elbow macaroni - stretched it further.   I make it  without, but often serve over pasta and top with cheese.  It can be served over rice!  Also super yummy over a baked potato!!!!
Chili is still one of my favorite cool day meals!  Basically ground meat, beans and tomatoes (of some sort) - doesn't get much easier.
Gravy
Made gravy from all the different pan drippings.  None of it was wasted.  My goodness gravy was made from anything and everything.  Sausage, hamburger, drippings from baking ham or bacon or roast - just about anything.  Gravy over bread was and still is a meal!  Pan drippings, a little flour and water or milk and BOOM you have a cheap meal.
Just a few ideas for old time food ideas.  Nothing wasted and everything was tasty.  People back in the day sure could come up with yummy goodies from just about nothing.
We need to take some lessons!
I love old time cooking.  I still do and try some of these things.
I have MORE recipes for making goodies with lesser ingredients (they used to have to make do with eggs, milk and butter at times).  I will share more recipes in the near future.
It sure is fun learning some of the ways of days gone by.  Good food and no waste - what is better?
ENJOY
Posted by Cheryl Kimbley at 9:39 AM