There are many reasons to be prepared for the worst.  We all have our own particular set of circumstances.
Many younger folks (and older) today, just don't get it.  It really takes very little to happen, for the world they know to stop. 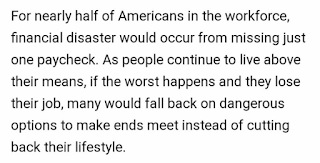 Young and old - SO MANY people just aren't prepared.

I could go on and on.
You all know some of these people too.  Sadly I 'personally' know more that wouldn't survive than would.  Most of them are in my family!  I have tried and tried to reach them, BUT  it isn't going to 'happen to them'.  They just won't listen and they aren't responsible humans.  It is sad.

That does not include you gals at all.  WE all know what the consequences could be.  We all have learned, taught, and educate ourselves daily in some way.
The reason IS SURVIVAL.