Today I am going to mention a couple of books I have read in the past.  Both on the subject of limiting our purchases.  One is about NOT buying things and the other is about buying only local (or growing own).
I have read both of these many years back.  Some people like the books and others find them crazy.  I guess it is all about your take on the subject.
The first is called - Not Buying It - My year Without Shopping.  By - Judith Levine.  Now there are a lot of books about this subject and even FB pages - but back in the day, she was the first.
Their philosophy was to buy nothing un-necessary for a year.
Therein lies the catch - un-necessary!!!!!  I guess it depends on each person.
Yes, you need to spend on home and utilities and medical and insurances and food.  It was mainly about not buying new STUFF!  No clothes, no gifts (they were made), no eating out, no frills.  I guess where I had a problem is that years ago, she thought spending $120 a visit at the beauty shop as necessary!  They had 3 vehicles for two people to upkeep.  Some things didn't make since.
For me, it would be about making do with what I have and making new uses of things and recycling what I could.
Could I go without buying stuff for a year?  Sure - I don't buy that much anyway.
Could you do it??? 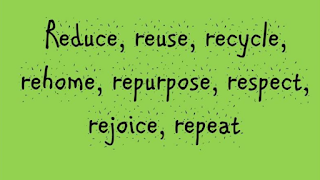 The other book - which I have read several times - Animal, Vegetable, Miracle - A Year of Food Life, by Barbara Kingsolver.
This is a true story of her family that moved out to the country.  They made it a mission to eat only what they grew or caught on their land and what they could get locally from friends and neighbors.
Now in theory this sounds wonderful - but it would also create HUGE challenges for many.
Depending on where you live - many, many things are not local.
Coffee, tea, different grains, and many fruits and veggies.
They used chicory for coffee.  Different herbs instead of teas.  The grains and flours they could get were just what was produced locally.  They made cheese and butter.  They made any goodies or breads.  They experimented a lot.  They only ate local produce - yes, they did try to preserve much for days when it wouldn't be fresh.  No fruits like pineapple, oranges or bananas - they didn't grow there.  All meat was locally raised, as well as milk and eggs.
I can't remember if they had things like baking powder or soda, salt and pepper, etc.
This challenge would be much harder for me to do than the first one.
Living in the city, there is a lot of stuff everywhere - but it is not fresh and local.  Now during part of the year there are the farm markets - which one could visit and utilize in every way possible.  Once winter hits in my area - you would be without a lot of stuff.
Some rural areas would be much easier to realize this.  It would still be difficult, I would think.  I mean, this girl loves her citrus during the winter months when it is cheaper!  There is no local citrus.
I am not a coffee drinker - but I do like tea now and then.  Herbs just don't cut it for me as a tea.  I will mix them in - but I don't like them alone.
Both were very interesting reads and great challenges to take "in part".  The first would be easier for me.  The second one - well - that would be very hard for me.  I DO try to buy as much local as possible - but if you really stop and think - there is much that we get that is in no way local!
Some people do versions of the second one - by buying within a 50 mile radius of home or a 100 mile radius.  But even then - there is much we would do without.
What do you think?  Could you do either one?  Would one be easier than the other?
If interested in how they did it - pick up the books at the library.  They are interesting for sure.
Posted by Cheryl Kimbley at 8:29 AM