Getting Creative - Using up the Old

I have told you I am working on using up older items that I have in the deep dark crevices of the pantry and freezer!!  Spooky!!!!  Stuff gets shuffled around at every cleaning - and well, things start getting older.
I have absolutely NO problems using things that are past "best by" dates.
Most all of the meat in my freezer has been vacuumed sealed and it lasts and lasts.  Now there are a few things that have not been sealed and they need to be used or just go bad.  That is money - and I can't stand that!
I have steaks that I got for Glen - and you know that they are older!  They are vacuum sealed and look great.  I am NOT a steak eater!  I will be using those in stews and soups and crockpot meals this winter.
So here we go.  Not all products got photographed before/after using.  Sorry.  But at least I got a pic or two. 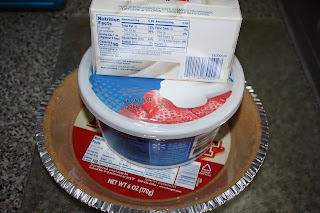 The crust and Cool Whip had been in freezer since early spring.  Cream cheese was just a little past date.  I added a can of peach pie filling and made a no bake cheese cake.  I didn't get a picture after - it was so good and shared it with the neighbor. 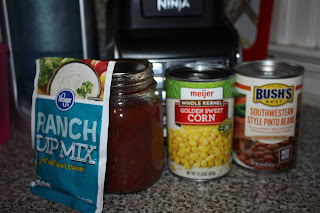 I used these ingredients with chicken and made a Mex. style chicken.  Ranch mix has been around for a while (I have a bunch) and I did remove a little freezer burn from the chicken.  It tasted wonderful when done. 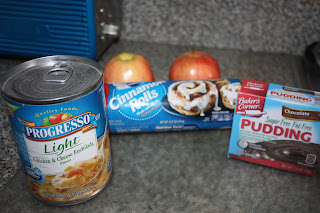 Soup was shoved to the back of pantry (I have a few of them) and it was used to make a sort of enchilada.  Pudding used to make milkshake and rolls and older apples used to make tasty dessert bites.
Mex. chicken was made with the chicken - which I trimmed up - and corn, beans, salsa (homemade) and ranch dip mix in the crockpot.  I love that stuff as it can be used in many ways. 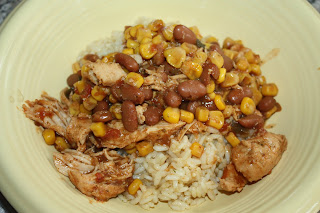 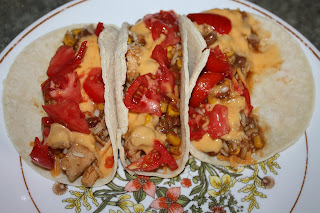 Mex/ chicken used in soft tacos
I had a box of quick cook long grain and wild rice.  I decided to use it up as I have regular cook long grain in frig.  This little box of rice got used in 3 meals. 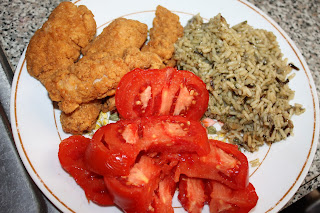 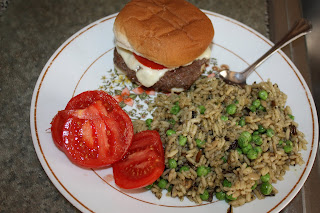 Added a few frozen peas to some of the rice and had it with a burger and tomatoes. 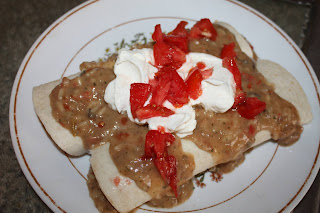 Added the balance of the rice to this meal.  Beans and a little rice in tortillas - then toped with rice and that can of Progresso Chicken & Cheese Enchilada soup (above).  Topped with sour cream and chopped tomatoes.  My 'sort of' enchiladas!  Super tasty.
Froze balance for another day.
I pulled some deli turkey out of the freezer on day and made a grilled turkey and cheese sandwich (no pic) and had it with some leftover in jar - homemade slaw and sliced tomatoes.
The balance of the turkey went on my 'sort of' pizza! 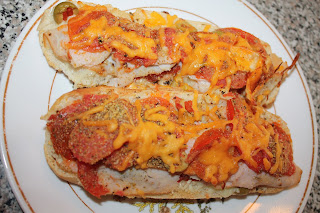 Hoagie bun - turkey, a little pepperoni, chopped olives and a bit of onion, salsa left in a jar in frig and a thinly sliced tomato and  odd bits of cheese.  Baked.  It sure was tasty for just odds and ends.
Those cinnamon rolls (dated April) and a couple older apples became yummy cinnamon/apple bites.
I cut the rolls in half and sliced each apple into 8 pieces.  Wrapped the roll piece around each slice of apple and baked.  Added a little icing when done.
Tasted like a combo cinnamon roll/apple pie. 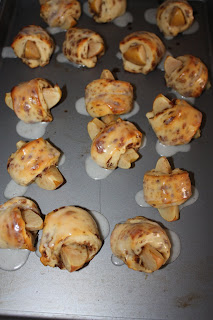 Two bites and it's gone!
I used the sugar free pudding mix (instant) to make an unconventional milkshake. (no pic).  I used about a cup of milk - poured in part of the pack of pudding - I didn't measure (can prob. estimate 1/3).  added several ice cubes and blended.  It was quite tasty and a nice no calorie treat!  You can use any type of pudding mix - you can add a banana or fruit too - you could mix pudding flavors.  Not super duper thick, but a nice treat for sure!  Cold and creamy.
I found a bag of faux crab in the freezer.  The last one I had.
I thawed it and made crab salad.  I added a little onion, some frozen peas, mayo, ranch dressing, seasoning.  Super easy and super good. 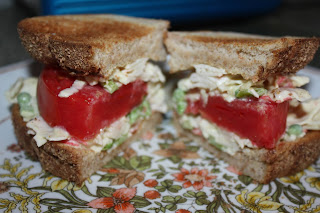 Crab salad and tomato sandwich.  Bread wasn't real big - I ate 2!!!!!!!!!!!!
Leftover crab salad got turned into hot crab dip.  I added some sour cream, a couple types of cheese (what was left of each) and a few chopped jalapenos.  Heated and I ate it with crackers one day for a meal.  Oh my - yumminess!
I then had a small baked potato topped with remainder of crab dip and a cuke and tomato salad on another day.
A couple weeks ago I took a single serving can of bean w/bacon soup and used it (as is - no water added) to top rice.  The soup had been around a while.  I have a couple more of these and will use them up this fall.  This was a tasty and quick meal. 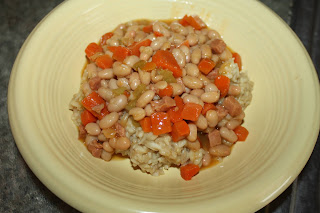 So there you have it - my digging deep and trying to get creative.  I hate waste.  I love being creative and I am not really picky.  This has just been a few items over the past couple weeks.
Holiday sales and fall/winter sales should be starting up soon.  I always like to get those goodies - well, I can't justify to myself, if I have older stuff not being used.  So I am USING it UP!!!!
It is nice to have different meals and nice to use things and clear out some older stuff.
** Don't be put off if you have a 'little' freezer burn on meat.  Cut it off and use remainder.  I have found that if marinated or used in a nice seasoned dish - it tastes perfect.  No off taste at all.  No waste.
Dig deep in those corners and crevices and pull out the things that are in need of using.  Dig deep in that freezer.  Get creative!!  You can really have fun with this and make some new and creative meals.  Who knows - they may become family favorites!
DON'T WASTE - USE IT UP - SAVE MONEY
Posted by Cheryl Kimbley at 9:56 AM