My brother and sister in law called to see if I wanted to take a small road trip with them.  Yes please!
We drove about 65 -70 miles from here to the Mennonite Store! (Used to be Amish)
It was a beautiful day for a drive - nice and sunny and not too hot.  Good conversation.  Was with family.

There was a lot of road construction for part of the drive, as they are building a new interstate through that area (sadly) - but it really didn't deter us with much backed up traffic and no detours.
It was pretty amazing to see all the changes in that area.  I realized yesterday it has been 4+ years since I made the drive down that way!

We were driving along and brother pointed out the window and "Wow, look".  I looked over his shoulder expecting to maybe see an eagle or something flying over - but NO - there was a bright yellow airplane about 50' off the road flying over the car!  It flew into the field and kept getting lower until it was just feet off the ground - it was a crop duster!  I have never seen that before - pretty darn cool.

Once we got past the construction area - it appeared that absolutely nothing had changed.  All the small towns looked just as they did back when I made that trip often.  It was so nice to just see all all the 'old' familiar.  It is country - so lots of fields, hills, and trees and farms and farm houses.   I loved it.

It appears the "Amish" sold to a Mennonite family who now runs the store.  It used to have gas lights and propane operated coolers - now it it all electric!!!  The family lives in a house just next door.  The whole family works there - Mom, Dad and kids.  The girls looked to be about 10-12.  SO pleasant and talkative.  There were other Mennonite gals there as well - they love telling you about their lives!

They have remodeled inside the building too.  There was no scratch and dent section any more.  They moved things around and expanded the little 'deli' section - to a bigger deli and eat in area.
It was obvious that lots of locals come there to shop and many 'worker men' came in to get lunch sandwiches. 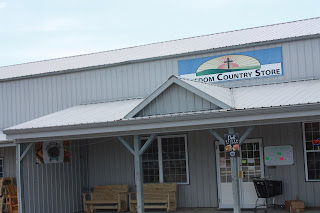 My goodness we walked up and down every aisle so many times, so as not to miss anything!  The store isn't huge by any means - but they pack a lot in there.
After shopping we each ordered and sandwich on homemade bread.  Had a little picnic in the parking area!  It is amazing how something as simple as a sandwich can taste so good when you don't have to make it yourself!!!!  That was the first 'restaurant' food I have had in months and months.

I didn't buy a ton of stuff - just a few items that were different that I don't see around here and some snacks. 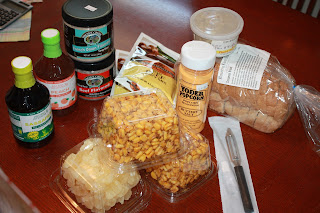 Toasted corn and dried pineapple for snacks!  Sassafras and peach concentrate for drinks.  Beef gravy mix - to use in soups and stews as a thickening agent.  French onion soup  bouillon and beef, pizza seasoning.  Homemade loaf of cinnamon bread (YUM) , buttered popcorn salt and a new veggie peeler.  My old one is sooooo old so I treated myself to a new one! 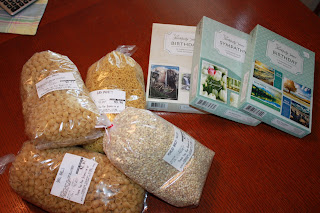 2 boxes of religious birthday cards and one of sympathy.  The price works out to .29 a card!  Barley (love in soups) and miniature elbow macaroni and shells to use in my jar mixes I will be making up for gifts. 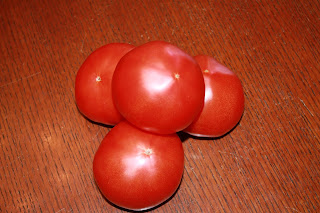 Couldn't help myself - I had to buy 4 pretty tomatoes.  Mine won't be ripe for at least a couple weeks.

I noticed they were still selling the Amish cookbook that I have.  I bought mine well over 30 years ago.  It appears to be the same version.  I guess some things just don't change!

It was a nice day and it really was simple fun.  It was nice to see a different landscape for a change and one that was countrified!!!!  It was also nice to come back home where life is comfortable and familiar.  My kitties were glad to see me - as lunch was LATE yesterday!!!  LOL

So there you go.  My small diversion to all the garbage going on in the world.  It was nice and pleasant - as were the people.
I did notice that almost everyone wore a face mask (not mandatory in that county).  The young girls were busy sanitizing carts, counters and door handles.

I loved my little day visit in the country.  Sometimes just a little distraction from life is all we need to revitalize our attitudes.
Have a blessed day!
Posted by Cheryl Kimbley at 9:09 AM